3 Months. Waiting for my Brain.

My silence and my need to reflect has brought about great changes in me. I wait during the time of Coronavirus, in the UK, waiting to go home to China, and finally I feel freer to write up my experience.

What happened in between …

The end of the semester. We watched 4 hours of documentary films from my second-year students. Like all end of semesters, it was emotional and mostly successful. Goodbye till next term, and the feeling of a great job done; however, I felt strange and lightheaded, with a pain in my left ear which had come and gone for months. Today it was bad. Very bad. I walked home along Jinshatan - Golden Beach - taking photos, when suddenly everything went into a blur. I had to sit for a long time and knew something was very wrong. 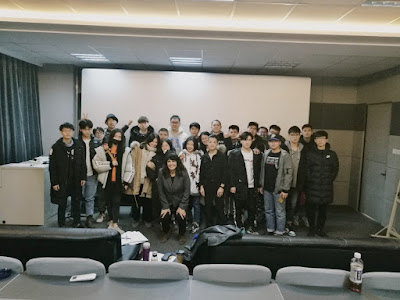 The next day I went to the ENT specialist at the Qingdao International Hospital. I did a hearing test. I had substantial hearing loss and an MRI scan was ordered.

The following week, mid-May 2019, I had a 2.5cm benign brain tumour diagnosed, called an Acoustic Neuroma. I was told it needed to be removed surgically and I could make an appointment right away with their neurosurgeon if I wanted. 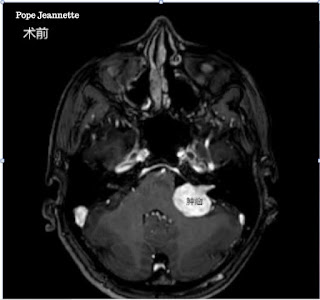 I panicked. I needed time to think. THINK!

I felt devastated and confused. I sat in the little park by the hospital near the baby clinic, watching newborns being taken home by their mothers and fathers. It was all so tranquil and fresh, but I could not stop crying.

I immediately looked up the effects of Acoustic Neuroma brain surgery on Baidu. In worst-case scenarios, permanent facial paralysis, total hearing loss and maybe death were all possibilities, whereas the better scenarios were harder to find. Most survivors reported long term dizziness and often hearing loss.

I went back to the home I share with a Chinese family, unsure and scared. Over the next month, I read as much as I could. Many stories horrified me, and I lived in denial, then in fear.

By July I was resigned to my situation and only had three choices: wait and see, gamma-knife radiation therapy, or surgery. All three worried me for different reasons.

I had met four male Chinese neurosurgeons, but did not connect with them. Two were arrogant, one very young, and the fourth could not help as his hospital did not have a license to operate on foreigners.

I began seriously thinking of having the treatment back in England during summer break, when I met, by chance, Dr Wang Zhigang from the Department of Neurosurgery, Qilu University Hospital, Qingdao.

The moment I walked into his bright clinic, full of patients holding MRIs, helped by young and cheerful assistants, I felt encouraged. His empathy and humbleness touched me; also his attitude towards the patients.

Yes, he could treat me. Yes, he was confident, yes!

Later, I learned that he was one of the best neurosurgeons in Shandong Province and well respected throughout China. 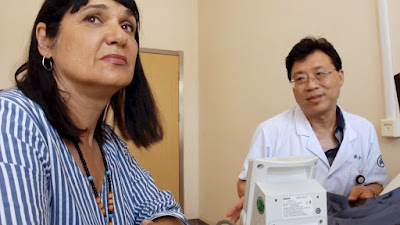 He looked at my MRI. Wait and see was out of the question, and gamma-knife not recommended as I was ‘still young and healthy.’ He explained that in China it is used for older, fragile patients. It is still uncertain, yearly MRIs are required, and later, if needed, removal is more difficult. "Your tumour is a routine operation, one we do many times a month. If you agree, I can do your surgery.” He concluded.

Still, I cried. He took my hand. "Go home to reflect. But, if you choose to have surgery, then you must believe and trust in us and yourself."

I turned it over and over in my mind.

Once in England, I contacted the Manchester Centre of Clinical Neurosciences. A kind head nurse explained it might take up to 4 months from referral to see a neurosurgeon. I only had a 6-week break, so I visited a private consultant neurosurgeon in Harley Street, London, for his opinion. I had to wait 4 weeks for an appointment at the end of August.

Dr X looked at my MRI while I explained the Chinese approach.
"Your tumour is still quite small, so normally I would suggest you wait and see. This would be the perfect solution. Secondly, gamma-knife therapy could be considered as you are no longer young, therefore the chances of cancer or malignancy developing in your lifetime would be pretty rare. The last choice would be surgery, which I can do for you if that is your choice." He paused. "Total tumour removal is never guaranteed with surgery and, no matter how good the surgeon, facial paralysis is a possibility. You will lose your hearing."

I paid 285 pounds for this twenty-minute consultation.

I went back to sit in the opulent waiting room.

The NHS involved months of waiting. I would need to give up my wonderful job in the film school, depend on my dear old mum, or young daughter and her family. And, if I chose Dr X, the cost would be about 36,000 pounds.

Yet as I sat in the August heatwave I could mentally hear Dr Wang's voice: then you must believe and trust in us and yourself

I felt a rush of panic, then relief. It was done, no more worrying, just go for it. I was going back to China.

This was the man I wanted to open my head and go into my brain.

I had had two months of preparation. NOW I had to own my decision and learn how to make the best of a very difficult journey.

For others who may be facing a similar journey, I share this with you. I prepared for surgery mentally, physically and emotionally. Firstly I chose my surgery date. I liked 20 September 2019, it felt right. I began gentle yoga, acupuncture, took flower essence to counter fear and give clarity. I meditated daily with uplifting music, and stopped reading anything negative, focusing only on a perfect scenario in which Dr Wang was an artist with dexterity and knowledge. I pictured myself laughing, walking and talking with ease after the operation. Any opposing thoughts I pushed away, not allowing anyone to talk me out of doing this in China. (A few friends, both Chinese and foreign, told me Chinese hospital horror stories. I blanked them out.)

I bought arnica for before and after the operation and learnt about juicing and supplements to build my immune system. I drew little pictures with empowering words to carry with me, beginning to create complete confidence until I could not consider anything but success. There were moments of apprehension, but I shut them out, knowing I had to give myself everything I had - as this was the only power I possessed.

The time had finally come - Qilu Hospital,the 16th of September. I entered Qilu with my Chinese family and two friends. I was the first foreigner to undergo brain surgery here, which was stressful for the ward staff. They were lovely, however, and I was not treated any differently from the Chinese patients; this made me happy. I was one of the same family.

Dr Wang and his team do rounds every morning, promptly, before surgery, while patients are given MRIs, blood tests, and we prepare, together, like a team. My roommate and I had moments of fear but kept telling ourselves not to give in to trepidation. 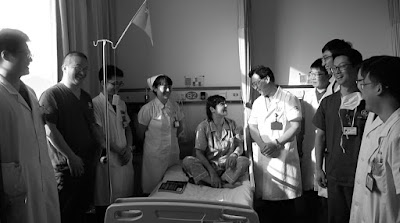 Thursday 19th my head was shaved. It was marked with a black pen where they would cut me open.

On Friday 20th at 8.30 am I went to the operating room. They give no pre-med, which is good as I had a chance to be fully aware of everything. The last thing I remember was a conversation about Dr Norman Bethune, the great Canadian doctor who died during the Sino-Japanese war on the front line of battle from blood poisoning. He is still loved and revered by Chinese doctors today. 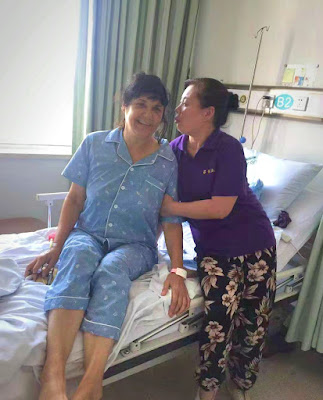 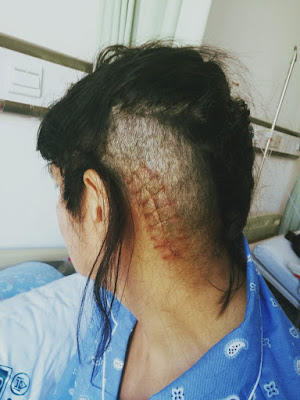 With Acoustic Neuroma, saving the hearing is almost impossible, because sparing the facial nerve is more important.

The first thing I heard on waking was that my 10-hour surgery had been a success, with 100% removal of the tumour and my facial nerve intact.

I felt terrible from the anaesthesia but cried with joy.

One week later my perfect stitches were removed.

28th September I went home. I was laughing, walking and talking with ease, with only slight pain and momentary dizziness.

I saw Dr Wang today. He is delighted with my recovery.

I still have ways to go, yet I have time to heal.

I have little facial weakness. My hearing is still there, although reduced, I can hear from my left ear. I have heartfelt gratitude to Dr Wang and his team and finish with the words I said to him in parting, and what I put on his banner of thanks:

"I believed in your profound knowledge and artistry. You saved my life. Your friend, Jeannette Pope"

I have begun my documentary film - 3 Months. Waiting for my Brain -  in which I shall be comparing the different approaches in China and the UK for Acoustic Neuroma  brain surgery, and asking the question: can a patient's attitude to surgery affect results? 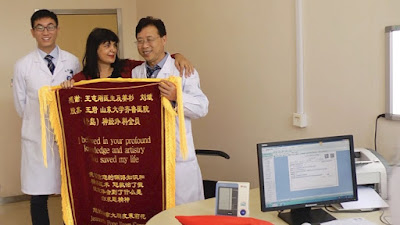 Jeanne Pope
Hello, Nǐ hǎo, from Huangdao, China. Welcome to my blog, from fish to film, about the things and people I encounter on my walks along Jinshatan - Golden Beach - to the film school where I work. Vignettes of various subjects: beach, student life, films, fish, trailers, starfish, lovers, the challenges of working in an all-Chinese environment, and how to get around and about and begin the descent into the curious and wonderful Chinese culture. All depending on the week, for China is forever changing, fast, and things never seem to stay the same for long. Here today, gone tomorrow. I work at the Beijing Film Academy-College in Qingdao, an annex from Beijing, and the eight kilometre walk from my house takes me along the beach. A journey I have been doing since I came to live here. I used to write a few descriptive pieces called “Friday Gossip”, and then stopped, for no reason. I guess the end of last semester took its toll, but now I am back, back to the beach, back to old faces and friends. And this time I can speak some Chinese, and am braver, so have more stories to share. 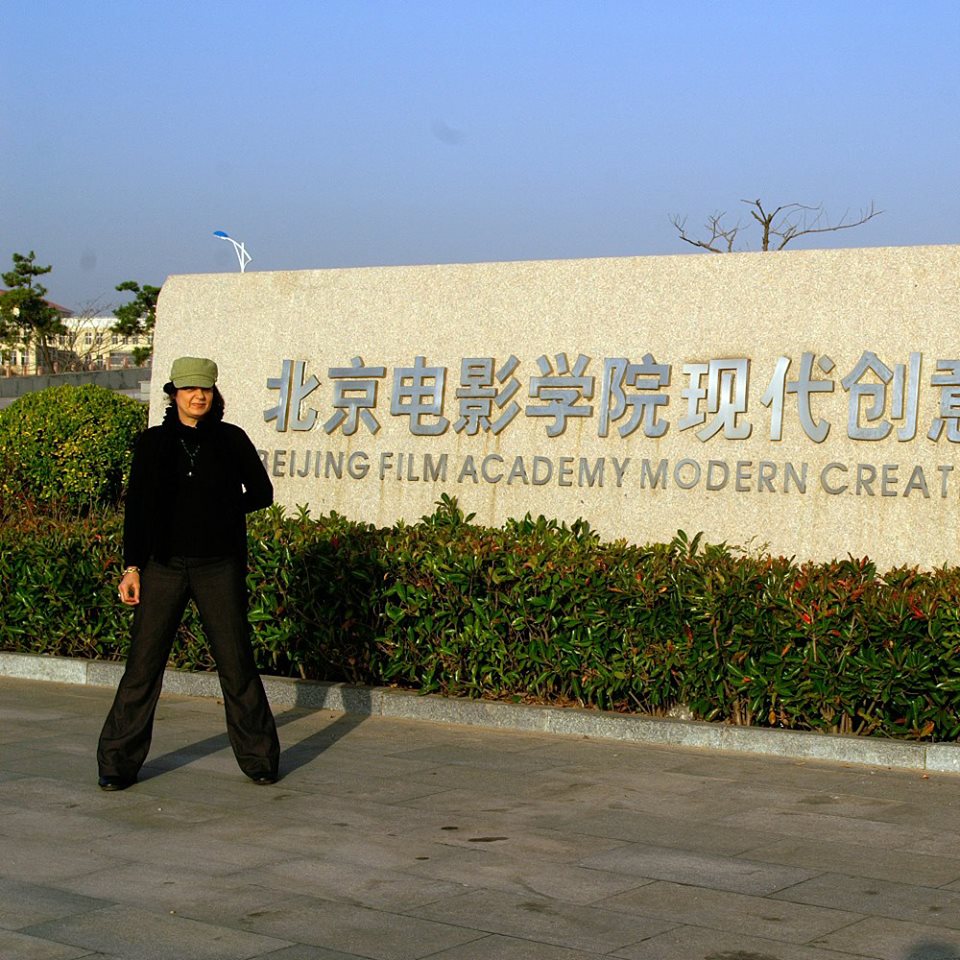 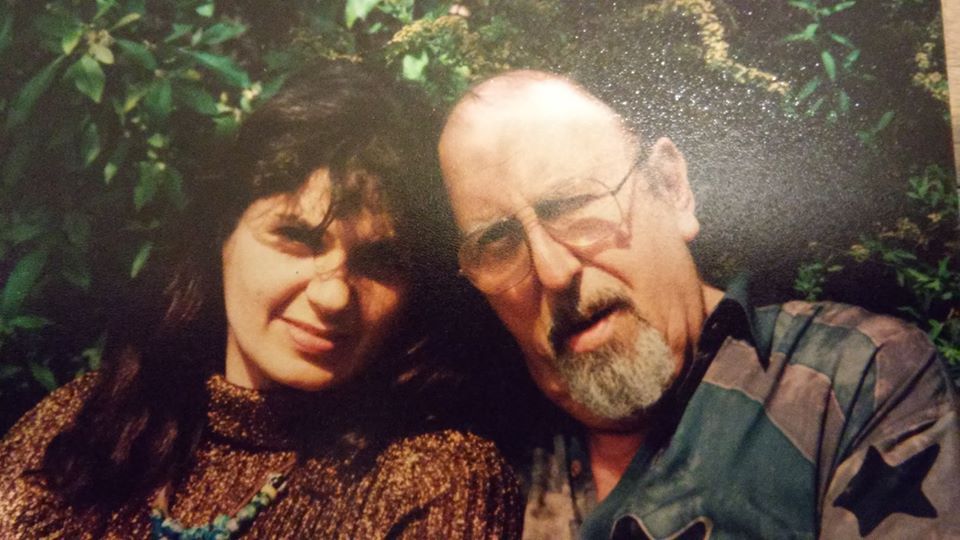 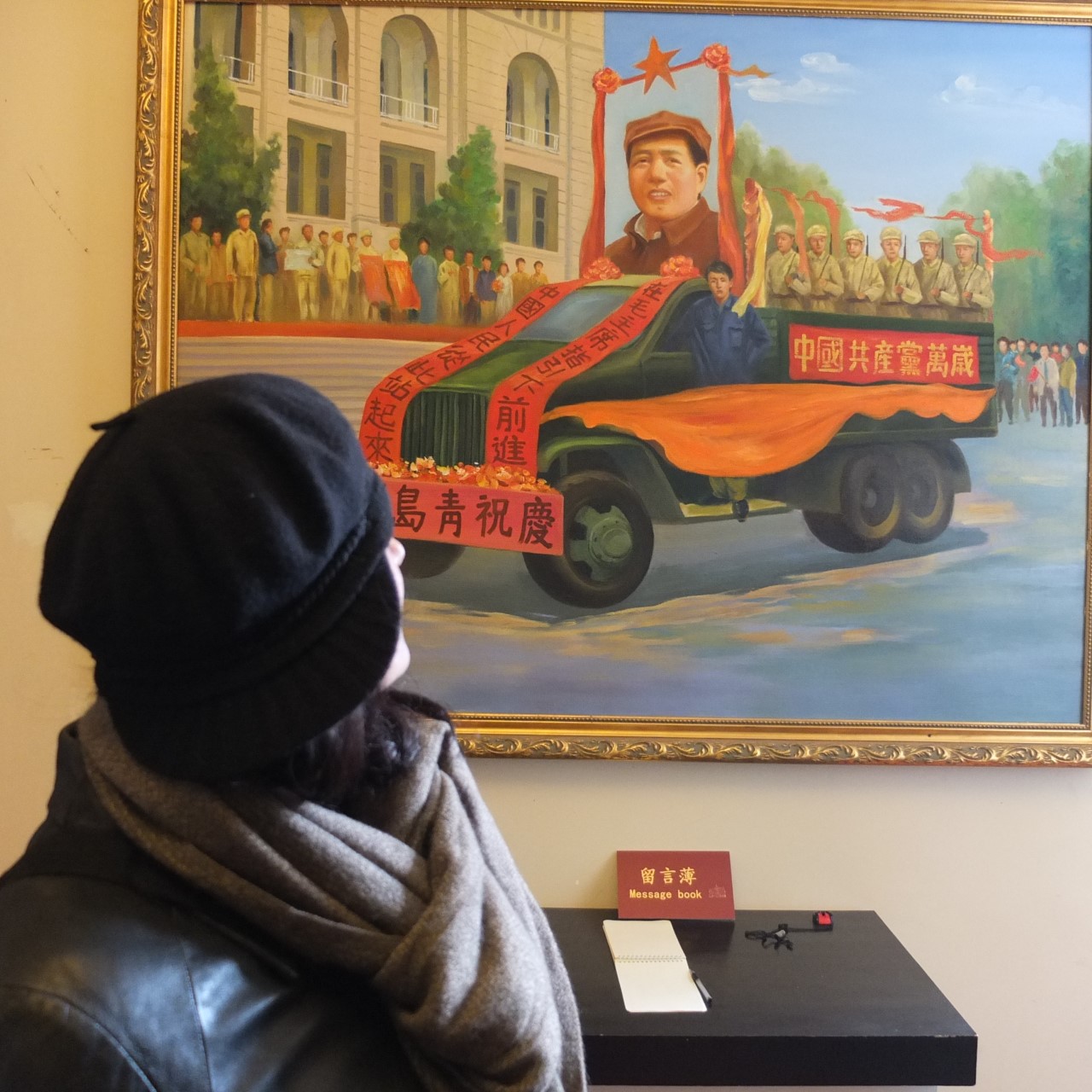 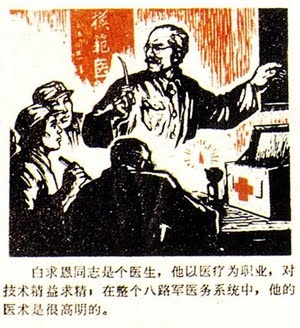